Maps are one of my favorite approaches to presenting information.  However, they are just as vulnerable to abuse, misuse and overuse as every other form of data visualization.  Traditionally, maps employ color ranges, textures, symbols and boundary widths to describe data.  It is, however, easy to be distracted by individual regions that are very large rather than the patterns that emerge from multiple areas that may be smaller.

While your eye is drawn to the darker shades of blue the size of the other provinces and territories compete for attention.

An alternative to this approach is the cartogram, which eliminates the distraction of size by modifying the shape of the mapped regions according to regional differences.  In this cartogram of the same 2011 population density data, the boundaries of the provinces and territories are inflated and deflated according each region’s population data. 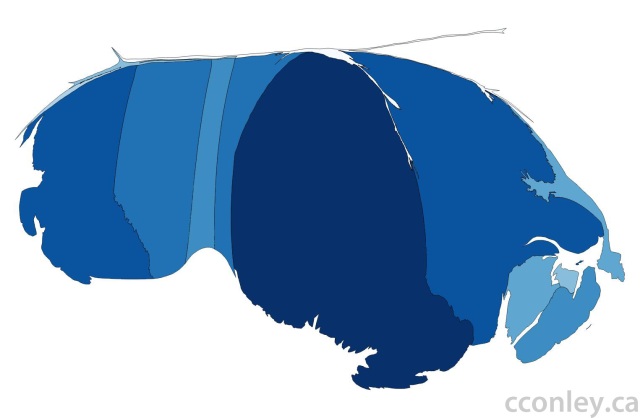 Resizing and reshaping the geographies of provinces and territories to describe population size provides a startling view of the country.  In this cartogram, high population density, like Ontario and Quebec, is reflected in a dark blue boundary that appears to have been inflated like a balloon.  Low densities, like the Territories, are light blue with deflated or constricted boundaries that look like ribbons.

When considered from the perspective of Tufte’s data-ink ratio, these cartograms may not be as efficient as a series of bar charts.  They do, however, provide a view of Canada that can challenge a viewer’s pre-existing perceptions of the provincial and territorial relationships.  When sharing these maps with others the reaction has often been prefaced with “I hadn’t realized…”.  Tables or bar charts could be used to present this information but here I am finding cartograms are more provocative and memorable.